Then there was only me

Picton a nice place for a stop over, the top 10 was almost completely booked out with only a bunk room left for Pete and me, still it was very clean and tidy and saved quite a few bucks on the motel units we normally stay in. we had a bit of a wander round town looking for a suitable dinner establishment, while the Irish pub had good signage the menu didn't take either of our fancies so we ate at one of the swanky bars on the water front strip, not sure the food was any better once we had eaten it. 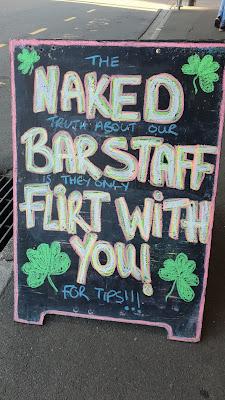 Unfortunately Pete's wife Alix is unwell, I pointed out that family comes first, so he's on the plane back to Auckland at lunch time tomorrow.
I'll stay an extra night and do the morning ferry crossing with a direct drive to Napier.
Posted by Neil at 20:44 No comments:

I was Sucked In 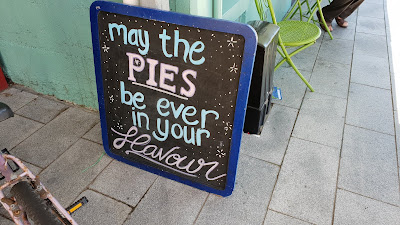 On our stop in kaikoura we walked past this sign outside a cafe, how could we not go in? Sure enough there was one steak and mushroom pie left in the warmer which I ordered with a flat white. The service was good and friendly, the pie was not so good and at $10 for it and the worst flat white on tour I was a bit disappointed, bit of a reality check after Oamaru.
Posted by Neil at 22:38 No comments:

Oamaru - Home of the best Steak and Mushroom Pies

Leaving Dunedin and going to Christchurch we had a few stops. First in Moraki where Google once again had problems locating things and then in Oamaru at the Steam punk museum, Scott's Brewery and a pie shop with the best pie this tour and also the best steak and mushroom pie I've ever eaten, and I've eaten a lot of pies.

Back to the Mainland

Once again on our ferry crossing back from Stewart Island a maritime disaster was unfolding with a 16 ft power boat broken down and sinking just outside bluff harbor. Fortunately this time they had called a mayday in time and our ferry and the local coast guard turned up to rescue them and no one died.

Back in Bluff we took in the obligatory tourist sights of Bluff hill lookout (really bloody windy, Pete had to hold on to his glasses) and the road sign pointing back up to cape reinga

On our way up to Dunedin we stopped in at the Invercargill Brewery, closed and looking unlikely to re-open.
On-wards to the Top 10 Dunedin. On the way to dinner we drove past Emerson's but after suffering the cloudy jug of their IPA in Oban I decided  to go directly to the rather nice pub - Carey's Bay Hotel

Hello Again sorry for the lack of updates but while our accommodation was much more luxurious than last time it still had no wifi
After crossing the finish line Coppelia tied up next to the wharf to flush and refill her water tanks. We then dropped her off on a mooring and returned to the pub to await the rest of the finishers. No real damage except the pump on the toilet packed up, this happened early on in the leg so we had time for a new one to be brought down for repairs.
After bit of a lie in we got up to pouring rain, Sally and Rob set off to fix the loo I settled down to doing the washing.

Next day the sun was back out and the sand flies seemed to have gone off to feast elsewhere. Rob drove us and a few of the other sailors in Coppelia around to the abandoned Norwegian whaling station, There were less bugs and more to see than our previous Stewart island stop over where we investigated Ulva Island

On our return we got to see the chorus van being loaded ready for return to the mainland.

Yes Rob's boat won the cardboard boat race. Motorboat 2nd, Sally's was by far the most solidly built and most water tight however it suffered from having a large water displacement and coupled with poor paddle selection couldn't keep up.


Things to remember for next time If your jug of beer comes out cloudy with foam on top but no fizz it is probably better to swap it for a different beer the kegs gone off.